Excel makes it easy to figure out the average of a group of numbers, no matter how large or small. It makes it easier for you to analyze important data. You will learn how to use Excel’s “average” function right here.

Most of us are familiar with average values. They offer a great way, to sum up information in a single number. Which gives us an immediate picture of any dataset.

If you have a large set of data, Excel can help you to find statistical values such as the average.

Not only can this help to enhance your understanding of a dataset, but it can also make information easier to present to supervisors, investors, and even loved ones. Using the AVERAGE function in Excel is easy and takes just a few clicks of the button.

In this tutorial, we’ll show you: 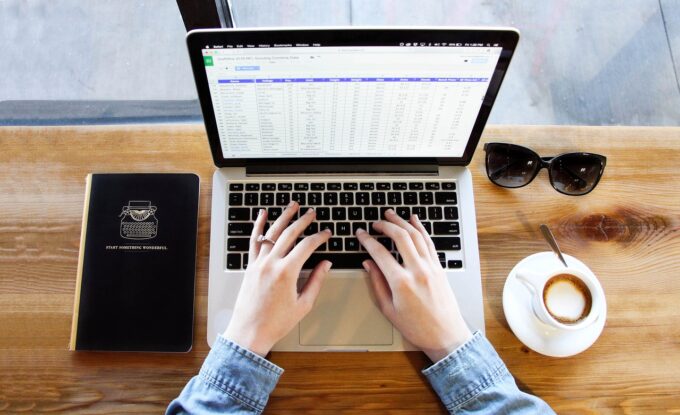 What is an Average Function in Excel?

The average of a group of numbers describes the central value of the set.

The first thing to remembers is that using averages can help us to draw generalizations from sets of data.

There are three different ways that are commonly used to measure central tendency:

When Do Averages Come in Handy?

There are plenty of applications for averages in the real world, both at home and in the office. Notably, you can use averages to draw conclusions about your budget, your grades, yearly earnings, and even your car’s gas mileage too.

With this in mind, there are countless ways that averages can come in handy. However, you may want to look at different values depending on your situation.

The mean is best used with datasets that contain information that’s evenly spread, such as bell curves.

Extreme outliers in either direction can skew results and lead to false conclusions about central values in a dataset. It is important to realize that when outliers are in play, you should stick to using the median to represent the central value.

The mode works well for smaller sample sets. That is where there’s not enough data to draw relevant conclusions by calculating the mean or median.

The Basics of Excel’s Average Function

The AVERAGE function in Excel returns the mean number for any data set as opposed to the median or mode. In addition, it can be used as a worksheet function, making it easy to enter as part of a formula in a cell.

Your average will depend on the cells that you highlight. For this reason, it may be best to omit any statistically insignificant outliers. A value that’s too high or not high enough can skew your results, giving you an inaccurate picture of your dataset as a result.

Using the Average Function in Excel

Using the AVERAGE function is simple enough for even Excel novices to master in a matter of minutes. As a worksheet function, all you need to do is enter the formula correctly into a free cell to get a mean value.

The syntax you should use to find the arithmetic mean of a data set is:

There are very few components that you’re required to input into this formula. There’s only one parameter that you really need to fill out in order to yield an accurate result.

If any of the cells in the range you highlighted contain text, logical values, or are simply empty, the AVERAGE formula will ignore these. Cells that contain a zero, however, are included. If you want to omit any cells within a row or column, you should leave them blank.

If the AVERAGE function isn’t coming up with the results that you’re looking for, then you may want to consider modifying the formula slightly.

The AVERAGEA and AVERAGEIF Function

The AVERAGEA function allows you to include logical values and text representations of numbers in a reference as part of your end result. This also gives you more control over formatting.

Moreover, you can also combine the AVERAGE function with the IF function to limit the range of values used to calculate a result.

Excel’s IF function allows you to see whether a data point meets a condition that you specify. For example, being greater than another number or occurring within a given timeframe.

The AVERAGEIF function gives you the power to calculate a mean using only values that meet certain criteria.

The Average Function in Action

Here are some examples of common formulas used to find the average of various sets of data:

Ultimately, average values are an important part of everyday life. It helps us to quickly and easily understand even large datasets by giving us the central value of a group of numbers. Excel makes it easy to calculate mean values using the AVERAGE function.

Finally, we hope that this tutorial has helped you to better understand how to use the AVERAGE function in Excel.

Indeed the average function in Excel is such a powerful tool when it comes to analyzing data.

Do you need help in freezing columns in Excel? Here is a tutorial on how to do that.