I bought a MacBook Pro and installed Windows 7 with Boot Camp Assistant so I could access the “normal” Excel. This was important to me at the time because I was doing Excel development work in versions 2003, 2007 and 2010 on a Windows PC.

I love my MacBook Pro, which I consider my computer of the future. It’s great for dealing with Photos, Movies, Music, and all of my iOS devices.

I purchased the Mac versions of Excel (2008 and 2011) but they seem like a mixture of the three Excel versions mentioned above, and can be very frustrating at times. There are a few things missing in the latest Excel Mac version, like the Name Manager and the Evaluate Formula dialog box, to name just two.

Despite these shortcomings, I’m seriously thinking about selling my desktop PC and going exclusively with the Mac. That’s the crossroads I’m at right now. Letting go of the PC, but keeping the Windows versions of Excel.

BootCamp allows me to run Windows, and the Excel versions I need, but is very restrictive in the sense that I have to shut down my Mac, then restart with BootCamp to run Windows 7. This is a real pain in the you-know-what.

There are other problems with running Windows on a Mac. For instance, I haven’t been able to get my Apple Magic Mouse to work with Windows 7. (Go figure.) And using Dropbox was the best way to get Excel files between Windows 7 and Mac OS X.

All of those issues were solved when I purchased the Parallels Desktop software for Mac. Now I can switch to Windows without having to shut down Mac OS X Lion. That’s just plain awesome!

I’m still getting used to how Parallels works, but this software is easily worth the purchase price. And my Apple Magic Mouse, just works.

Parallels Desktop on my MacBook Pro

Here’s a screen shot of the Parallels Desktop open on my MacBook Pro. You can see that I have Microsoft 2010 (Windows) open, but I want you to notice that I also have the Finder dialog box open. 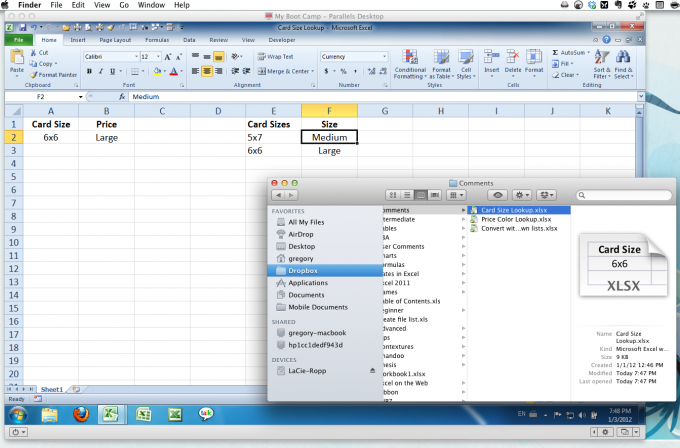 I dragged the Card Size Lookup.xlsx file from Finder onto the Excel 2010 (Windows) program and it opened. I then made a change to the spreadsheet and saved it. The file was saved back on my Mac from whence it came. This is the miracle of modern technology.

I still have lots of testing to do but it looks like the Parallels Desktop has made my life much, much easier. I know now which way to turn at the crossroads.