Converting a decimal time value to minutes and hours is easily done in Excel. That is, if the time value is less than 24 hours.

Here are three simple steps to convert decimal to time.

To change the cell format use keyboard shortcut Ctrl+1 to bring up the Format Cells dialog box, select the Number tab, click Time, then select the h:ss format as shown below. 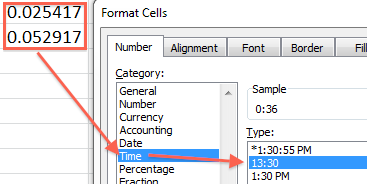 If  you have a lot of conversions then one column for the decimal values and another column for a formula dividing by 24 will suffice. Just change the formatting for the second column. The example above shows three columns for illustrative purposes and is not very practical.

Obviously a conversion can be done in one cell, if you:

And remember, this only works properly for decimal values less than 24 hours. 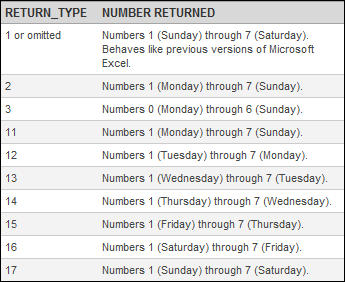 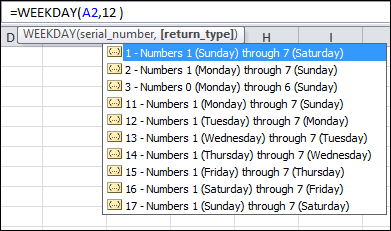 The unit of time in Excel is the Day. By using the NOW Function to show both date and time, you can see the underlying serial number by changing the cell format to General. 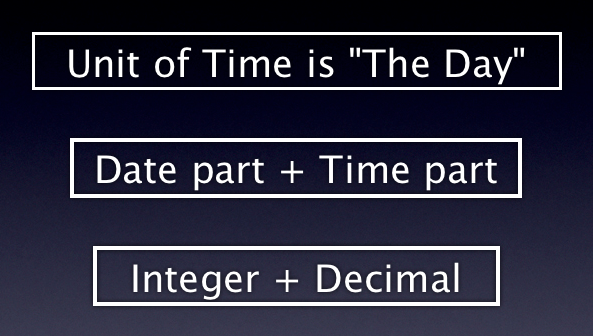 The Date and Time Calculator (Excel)

In the table below I entered a date in cell B2, a time in C2, and a formula in D2 that adds the two together. Excel automatically formatted this cell using a m/d/yyyy hh:mm format. I changed the row 3 cell formatting to General so you can see the serial number values. This is the function for time calculator in Excel.

You can clearly see that Date is a integer value, Time is a decimal fraction, and the Date/Time format has both together in one number.

Change the cell formatting to Time and you will see 7:12:30 AM (or your local Time setting format).

Tip: When subtracting two different times not in the same day, the integer portion of the serial number must be used or the calculation will be invalid.

In previous posts I’ve been going through some formulas designed to extract and convert a text string Date, to a Date serial number.

Given the text string Date below in cell A2, what I normally do is enter a single formula, then change the cell formatting.

The formula above in cell B2 is:

I then change the formatting by using the keyboard shortcut Ctrl+1 to bring up the Format Cells dialog box, click the Number tab, select Date (leaving the default short date format), and then click OK. 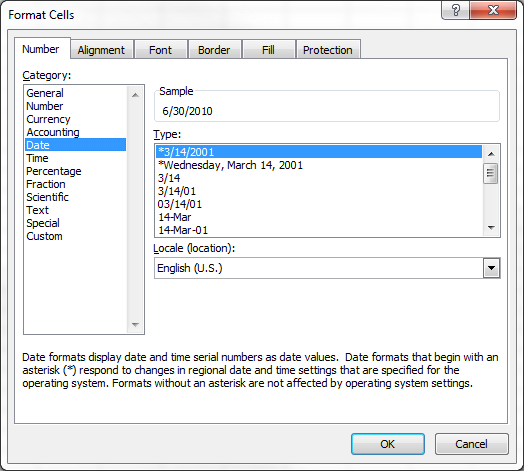 Oh, and then copy the formula down by selecting cell B2 and double clicking the fill handle.

There are a number of things in this formula: double negation, MID Function, Ampersand Operator, and RIGHT Function that combine easily, once you know how the individual parts work.

The VALUE Function formula in cell G2 has converted the text string Date from cell E2, into a date serial number.

Until recently, I always used the VALUE Function to do this conversion. It’s something that’s well documented in the Function Arguments.

However, all that’s required to change this text string Date into a numeric value (date serial number) is to perform a simple mathematical operation that does not change the value. Excel will then do the conversion for you.

The following formulas can be used as a substitute for the Excel value function =VALUE(E2), where E2 is the text string Date:

Quick Conversion of Dates in a Range

To do a quick conversion on an entire range, John Walkenback, in his book Excel 2007 Formulas has a neat trick.

Excel converts text string Dates to serial numbers, then adds a zero and you end up with the date serial number. Pretty slick.

In all of these conversions you end up with a date serial number that can be changed to a Date by modifying the cell formatting. I use the keyboard shortcut Ctrl+1, select the Number tab and click Date.

In my next post I’ll use one formula to convert the text string date into a real numeric date.

It’s not uncommon for database programs to export data in a text format. I downloaded some data from a web browser, and ended up with Dates that Excel didn’t recognize as Dates, but rather a Text string.

In a previous post I used the Text to Columns feature to extract and convert the Month and Day into a Date Format. Excel used the computer’s System Date to supply the Year. Since all the data happened to be for 2010 there was no problem.

Had there been data from any year other than 2010, the Month and Day wouldn’t have been sufficient to give the correct Date. Hence a formula is a better way to extract the Date, in this instance.

It was a simple matter for me to quickly put together a formula to do just that, but there are several parts to the formula, none of which I’ve covered in this blog. I really don’ t want this post to drag on to infinity and beyond 🙂 so I’m going to break the formula down in the next several posts and cover the following:

So I guess this is the first part of a series to Extract a Date from Text in Excel.

There are times when generating a list of dates comes in handy. Perhaps you need to log something every day for an entire year.

Or maybe you’re tracking stock prices and want to skip the weekend and only use weekday dates. How about a list of dates for each week of the year? Or just month ending days?

Dates for all of these examples can be created with Excel by filling a series.

This will give you a series of days between the starting date you entered in the worksheet, and the Stop value date. Changing the Date unit to Weekday will exclude all the weekend dates.

If the date series is not what was expected, it can be undone by using the keyboard shortcut Ctrl+z. I used this often as Rows is the default for Series in and I kept forgetting to change it to Columns about every fourth time.

Microsoft Excel has two different date systems that you will probably never think about because they exist in two different worlds: Windows or Mac. However, if you are sharing Excel files between Windows and Mac computers the potential exists for a great deal of confusion around dates.

What is a Date System?

Dates are represented in Excel by a numbering system. Days are assigned whole numbers, known as serial numbers, because the basic unit of time in Excel is the day. Each date system has a base date, or starting date, represented by the number 1.

The Windows date system has a starting date of January 1, 1900 that is given the serial number 1. The next day, January 2, is serial number 2, and so on.

The starting date in the Macintosh date system is January 2, 1904, which is given the serial number 1. The next day, January 3, is represented by serial number 2, etc.

The default workbook setting in Microsoft Excel 2010 is the 1900 date system. In the Excel Options dialogue box you are given the option to Use the 1904 system, should you so desire. 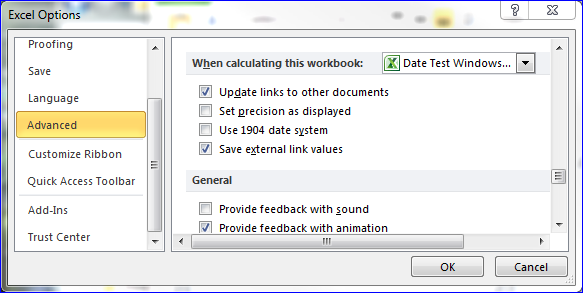 As you can see below, Microsoft Excel for Mac 2008 has the 1904 date system as the default workbook setting. By un-checking this option the workbook will use the 1900 date system. 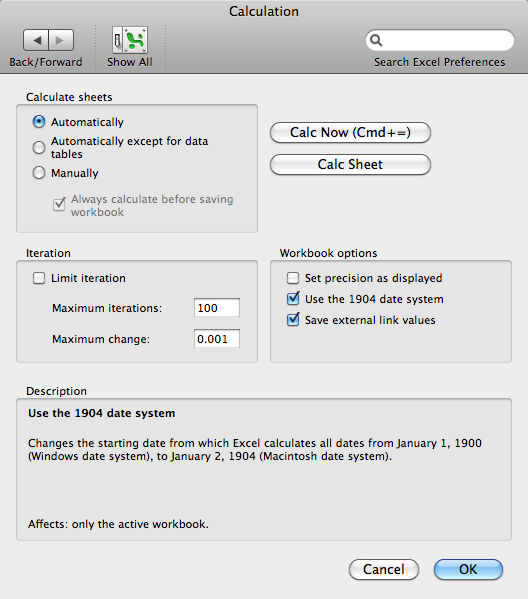 Some explanation here would be helpful.

If I copy the date 1/15/2010 from a Mac to a Windows version of Excel the formatted date will appear as 1/14/2006, yet the underlying serial number is 38731 in both versions. This happens because the two date systems have a difference of 1,462 days between the start dates. 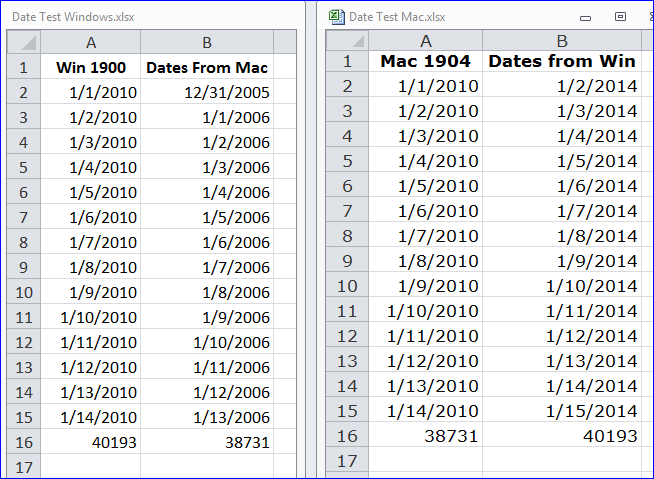 In column B of both worksheets I used a formula to reference column A of the other worksheet so you can how the same serial number is represented differently by each date system. For reference: on the Date Test Window worksheet, the formula in cell B16 is  ='[Date Test Mac.xlsx]Sheet1′!A16′.

Working with Windows and Mac Versions of Excel

One time a colleague of mine started a data collection worksheet using Excel for Mac and one of the data fields was the date. After data had been collected for over a week I realized the workbook was using the 1904 date system.

Knowing the file would be used exclusively on Windows computers I endeavored to change the date system setting and realized there would have to be some conversion of the existing data. In a different column I simply entered a formula to subtract 1,462 from the existing dates, copied, and then pasted as values. Next I un-checked the box for the 1904 date system and used the new date column.

My recommendation is to be aware if the Excel file you are using has come from a Mac and if so, check out which date system is being used. If the file will be used primarily on Windows computers then it’s best to use the 1900 date system.

Be careful when changing the settings for the date system because the dates will change for any current data in the workbook. If you have dates you need to convert from one system to another, adding or subtracting 1,462 to the dates can give you a quick solution for what I call date dementia.