In the Excel 2003 menu system, two clicks of the mouse will switch between workbooks. In the menu conflagration for Excel 2007 and 2010 it’s three clicks: View, Switch Windows, then pick the workbook. (As shown below)

This doesn’t seem like a big deal, but it bugs the heck out of me. So I added the Switch Windows command to the Quick Access Toolbar in Excel 2010 and now have my customary two clicks back. It works in Excel 2007, too.

Add the Switch Windows Command to the Quick Access Toolbar

In Excel 2010 right-click the menu, then select Customize Quick Access Toolbar from the pop-up menu.

In the Excel Options dialog box (shown below) the Quick Access Toolbar should be selected in the left pane.

Under Choose commands from, select All Commands from the drop-down list, scroll down and select Switch Windows, then click the Add>> button to move that command to the right-hand window.

You can move it up or down according to where you would like it placed on the QAT toolbar. Click OK to finish. 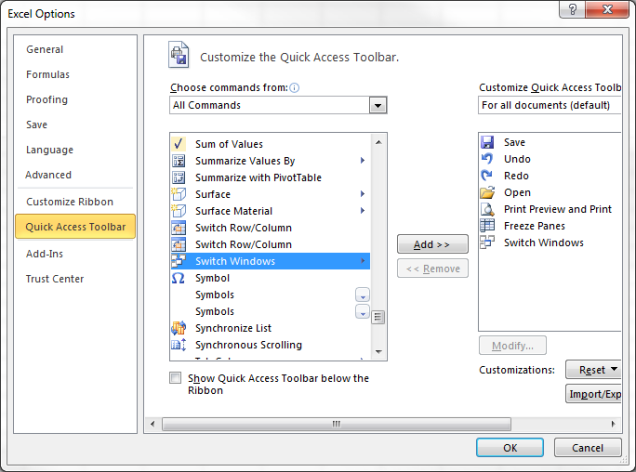 Now you’ve saved yourself one click and any associated aggravation every time you want to switch workbooks in Excel 2010.

This also works for Excel 2007. Did I mention that?

Use a Keyboard Shortcut to Switch Windows

The keyboard shortcut Ctrl+Tab will move to the next window. With only two workbooks open it will toggle between them quickly and is faster than using Switch Windows from the QAT.

However, with more than two workbooks open this method doesn’t work very well because cycling through each open workbook is slower, and sometimes confusing.