I bought my first Mac almost 11 months ago and now comes the moment of truth. I need to go on the road and take my MacBook Pro with me, but also need to take several versions of Excel for Windows (2010, 2007, 2003) to validate and tweak an Excel reporting package.

The Boot Camp Assistant allows me to partition hard drive space on my MacBook Pro and install Windows. So when I got the following message to create a partition for Windows on my Mac it just felt WRONG. 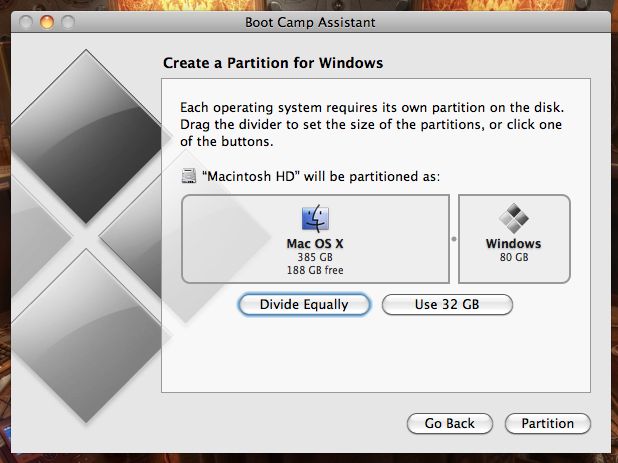 But the scary part was right before I began the Windows installation, with the realization of what I was about to do to my MacBook Pro. 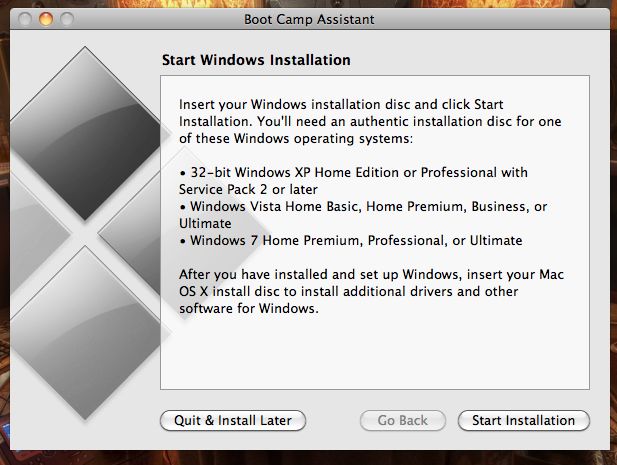 Thankfully the installation went off without a hitch, yet was slower than pouring molasses in winter. Especially when three updates for Windows 7 had to happen in succession with a restart between each.

A slight problem was not being able to eject the Windows 7 disk because the Mac-specific drivers hadn’t been loaded yet so I shut down Windows 7, and booted up with Mac OS X to get the disk out. After shutting down and restarting Windows 7, I loaded the Mac OS X installation disk and the Boot Camp Assistant then loaded all the drivers for my MacBook Pro.

All of this was done with the help of two references. I used a Gizmodo article as an overiew to the process, How to Survive Boot Camp (and Run Win 7 on a Mac), and during the disk partitioning and Windows installation I used Apple’s Boot Camp Installation and Setup Guide.

You can set the default operating system for your computer using Startup Disk preferences in Mac OS X, or the Boot Camp control panel in Windows. You can also select which operating system to use during startup by holding down the Option key. 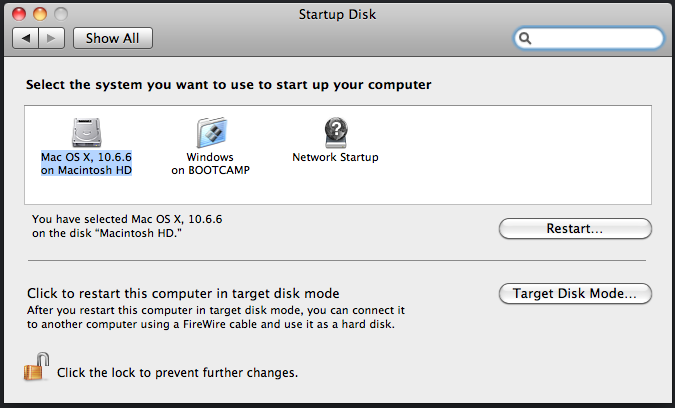 I immediately downloaded Firefox to replace Internet Explorer as my browser of choice. Of course then I needed to load a couple of browser extensions, LastPass and Xmarks, to get my passwords and bookmarks.

The Windows 7 disk partition must be in NTFS format so you can’t save files to the Windows part of the disk from Mac OS X. Consequently I installed Dropbox on the Windows disk and set up my Dropbox account to sync only with a few folders since my disk space is limited.

My only true aggravation is Apple’s Magic Mouse doesn’t work when running Windows 7.

Installing Excel with some Quick Modifications

I loaded three Excel for Windows programs: 2003, 2007 and 2010, which was uneventful. They all certainly looked brand new with no alterations to any of the settings.

For all three versions, I set the number of sheets in new workbooks to one (1). Here’s how. In Excel 2010 choose File Options and selected the Save tab to get to this setting. In Excel 2007 choose Office Button > Excel Options the select the Save tab. In Excel 2003 choose Tools > Options then click the General tab to find the setting. 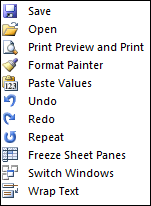 Here are my additions to the Quick Access Toolbar:

For Excel 2003 I had to expand the menus because all menus are abreviated by default, then after a few seconds they automatically expand. It’s enough to drive you nuts. Here’s how I fixed that annoyance. Choose View > Toolbars . Customize, then select the Options tab, and click the checkbox for Always show full menus.