Another factor is the default printer of your computer when the code runs. I usually set my default printer to CutePDF, which isn’t really a printer, but a program that writes (prints) to a PDF file. Using this default printer while running the PageSetup code chops mega-time off the execution.

One trick I used was to run this code in the Workbook_BeforePrint module. That way, running my macro to create a new report doesn’t execute the PageSetup code and therefore executes much, much, much, much, much faster.

In Excel 2010 I happen to record a macro for print settings and discovered a new page setup property:

The Application.PrintCommunication property is new in Excel 2010. It specifies whether communication with the printer is turned on. The values are Boolean and Read/Write.

Older versions of Excel don’t recognize this new property so you have to code around this fact to ensure backward compatibility. I checked the Excel 2010 version number by running some code in the VBA Editor’s Immediate window.

You can also check your Excel version by choosing File > Help and reading the screen.

Compatibility with Excel 2011 for Mac

By now I’m happy with Excel for adding this new property, but reality sets in and I realize that Excel 2011 can run code too. I check to see what version number Excel 2011 for Mac happens to be, and it too is version 14.0.

So while I’m in the immediate window I check for the Application.PrintCommunication property and find out it doesn’t exist. 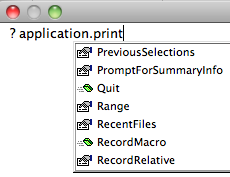 So I have to use the OperatingSystem property of the Application object to give me another condition.

I use the Left function to grab the first three letters of the operating system name.

Then change my code to account for earlier Excel versions AND the Windows operating system as follows:

Using the PrintCommunication property of the Application Object will help speed up your code execution. However, you need to be aware of backward compatibility for earlier versions of Excel that don’t recognize the code, and with the Mac version of Excel 2011 that should have the same property, but doesn’t.