Use Excel’s rounding feature to round decimals or large numbers in a spreadsheet. Round with functions, round up, round down, or round numbers to a certain decimal place in Excel. In this article, we’ll show you how to round numbers in excel. If you use Excel a lot, you have probably noticed that it is frequently used to organize data in numerical form. While this is very helpful, sometimes you don’t really want to work with numbers like decimals. In certain cases, rounding your data up best suits your needs. In this guide, we are going to learn how to use Excel to do the rounding for us! Don’t sweat it. Using this feature is much simpler than you may think.

What is the Excel Round Function?

Have you ever heard of the Excel round function? Before we dive into how to round numbers in Excel, we need to address this question. While learning how to use different aspects of Microsoft software can often seem daunting, it is more simple than you may expect. The Excel round function brings a number to a given amount of rounded digits. You can round either to the left or the right of a decimal point. 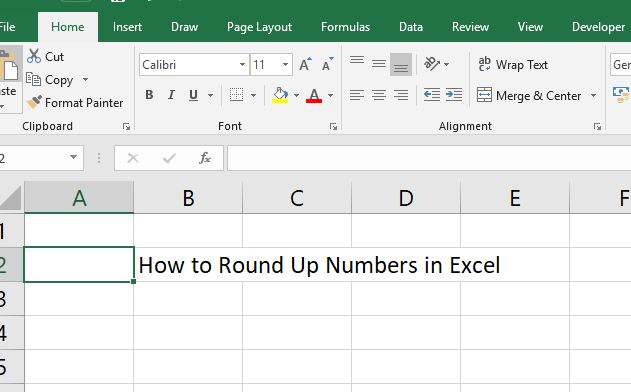 Why Should We Round?

To keep it simple, rounding numbers just makes them easier to deal with. First of all, if you are working with decimals, it can be such a pain to record them. Even worse, if you are presenting these numbers to someone out loud, reading decimals can get tedious.

Not just decimals are rounded, though. Whole numbers can be rounded too, most often to the nearest 10. Rounding is often used in business when dealing with money amounts or sales.

How to Round Numbers in Excel

Let’s say a company is trying to figure out its estimation of sales for the week by the transaction. Each transaction has a very different and specific number, but the company is just looking for rounded numbers. All of the sales are listed in Excel. How can we round them?

We’ll use a shortened version of their sales list as our example. Here are some examples of the types of numbers we are dealing with:

Using Functions To Round Numbers In Excel

Start by opening a new Excel sheet and listing your numbers in the first column. Excel uses functions to round. With the rounding function, you can use =ROUND, =ROUNDUP, and =ROUNDDOWN. For our first example, we are going to use the =ROUND function.

To begin, we are going to start by rounding just our first number, 56.09. Select the cell where you want the new number to appear.

For example, it may be best to put the new number directly next to the old number.

In the function bar, type =ROUND(A1,0) and hit Enter. A1 represents the cell we are round, while the 0 represents how many decimal places we would like to round to. Since we want to get rid of our decimals, we are typing 0. Our new number will appear in the cell. In this case, the number is 56.

If the Numbers have Several Decimal Places

If you are working with numbers that have several decimal places, such as 45.6726865, you may want to narrow these numbers down to just 2 decimals.

To achieve this in Excel, list your numbers in column A. Select the column next to your first number and type the function =ROUND(A1,2). This will round your number to 2 decimal places instead of its high number of decimal places.

You can complete rounding actions with any number of decimal places you desire, like simply by changing the second number in your function.

Rounding Multiple Numbers at Once

If you are working on rounding numerical data, there is a good chance you are probably working with a lot of numbers. It wouldn’t be very convenient if you had to go through and round each of those numbers individually.

Luckily, Excel makes it easy to round multiple numbers at once while still using its rounding function.

There is a simple way you can accomplish rounding all of your numbers.

The way to do this is to list out all your numbers in the first column. Then select the cell next to your first column and enter the rounding function you want to use for all of your numbers.

Let’s use =ROUND(A1,2). Hit enter to get the result for that number. Then, select that same cell and move your mouse over the bottom, right-hand corner of the cell until you see a plus (+) sign. Click and drag down until you reach the last cell you filled out.

Excel will automatically drag your function formula down through the selected cells. It will then perform the function for each number you have listed, giving you your result in the rounded column.

It is also possible to drag the function down past your entered information.

Zeros will appear where there is no information in the first column. Additionally, if you need to enter more information, anything entered in column A will automatically incorporate the function in column B; the zero will then change to reflect the newly entered number.

How to Round Numbers in Excel: Final Review

Numbers can be difficult to deal with in general, but when we add decimals to the mix, sometimes we are asking for trouble. Rounding can be difficult, especially when you are using lots of them or very large numbers with several decimal places.

For a quick, easy solution to your rounding problem, follow this guide on how to round numbers in Excel. You will be a rounding expert in no time, and you’ll save yourself a lot of effort!