The first argument, logical_test, is required. It’s any value or expression that can be evaluated to TRUE or FALSE. This argument can use any comparison calculation operator. There are four types:

The second argument, value_if_true, is optional. This value is returned if the logical_test argument evaluates to TRUE.

When TRUE = 1 and FALSE = 0 then everything is right with the Excel world. When TRUE = 0 then things are messed up. I think they messed up here. Although how many people omit the second argument in an IF statement? But I digress.

The third argument, value_if_false, is optional. This value is returned if the logical_test argument evaluates to FALSE.

Two Common Uses for the IF Function

Division by zero is undefined mathematically so Excel provides a glaring #DIV/0! when that happens. And sometimes we don’t want to show the result of a formula unless there’s some actual data to calculate.

Knowing what I do now about omitting the second argument, this formula could be re-written as =IF(C2=0,,B2/C2) with the same result. However, not a very good practice.

More commonly this formula is written differently as =IF(C2<>0,B2/C2,0) with the same result; doing the calculation if Num 2 is not zero (0) and returning a zero (0) when it is.

Many times formulas extend beyond currently entered data. This is where the IF function can be useful. The formula in cell D2 is =IF(C2<>””,B2+C2,””), which adds Num 1 and Num 2 if Num2 is not blank, and returns a blank (“”) otherwise. 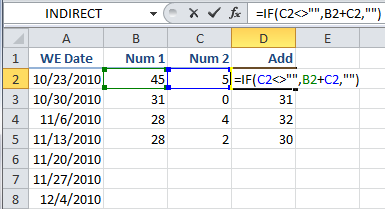 This formula could also be written =IF(C2=””,””,B2+C2) which reads like this: if C2 is blank, then return a blank, otherwise add B2 and C2. Both of these formulas give the same result.

13 thoughts on “The IF Function in Excel”