The other day I read an article on how to prepare my MacBook Pro for Lion, the new Mac OS X coming out this month, and discovered that any application that requires PowerPC is incompatible with Lion and will not work. See update at the end of this post.

So I followed the instructions to check all the installed programs on my MacBook Pro and was surprised to find that Microsoft Query will be incompatible. This will affect any Excel for Mac versions you might have on your computer — 2004, 2008, 2011. 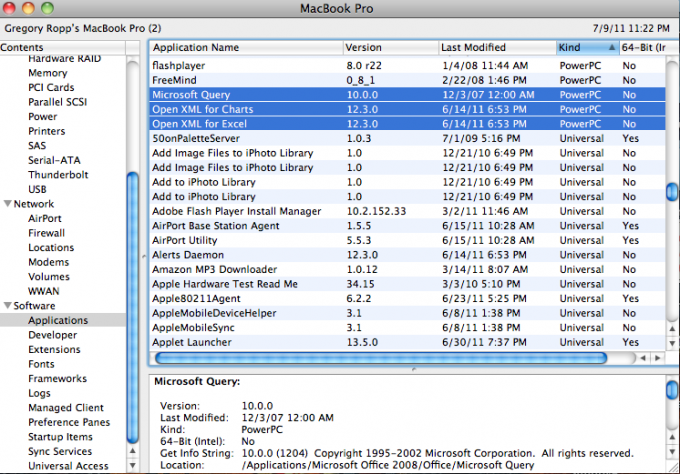 I would venture a guess that 99.4% of all Excel users have never used Microsoft Query, but I’m one who does and thought this might be significant to a select few. (Notice that Open XML for Excel and Charts uses PowerPC too.)

Microsoft Query allows you to pull data into an Excel spreadsheet from “behind the wall,” so-to-speak, of a database or ERP system. I made a career out of doing this very thing. Getting data that others could not.

In Microsoft 2010 (Windows) the new PowerPivot can replace Microsoft Query but in Excel for Mac there’s no replacement.

Excel for Mac users should beware, Microsoft Query is an incompatible app in the upcoming Lion upgrade for Mac OS X.

Since I wrote this post Microsoft updated their Office 2011 software. If you have Microsoft Office version 14.1.2 or later Microsoft Query has been updated to Intel, as you can see in the screen shot below, instead of PowerPC, and will now work on your Mac with OS X Lion.

Thanks to J. Monroe who pointed out the update by Microsoft in a comment.