I’ll review each hard-to-find item on the Ribbon’s Home Tab in Excel 2010 (Windows) and let you know where they are located in Excel 2011 (Mac). I’ve even got some nifty pictures to speed along that understanding. 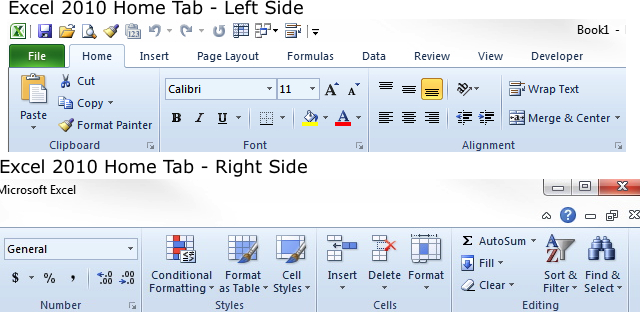 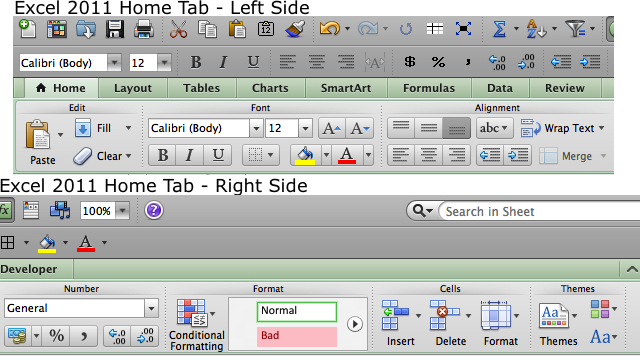 Similar Items on Both Home Tabs

Items You Have to Hunt For in Excel 2011

I’ll review each item on the Excel 2010 Clipboard and Editing Groups, which have items located on the Edit Group and elsewhere in Excel 2011, and finish up with the Styles Group that relates to the Format Group.

Note: The Themes Group in Excel 2011 doesn’t exist on the Home Tab in Excel 2010, but can be found on the Page Layout Tab.

The other items in the Clipboard group — Cut, Copy, Format Painter — don’t have a counterpart in the Excel 2011 Ribbon, but rather you can find them on the Standard Toolbar. 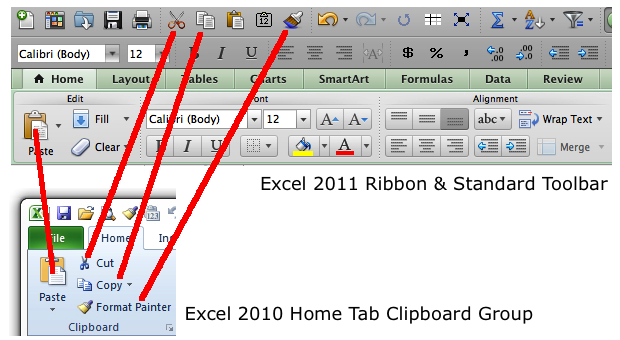 The Editing Group items are a mixed bag that can be hard to find in Excel 2011 unless you add some toolbar icons to the Standard Toolbar. 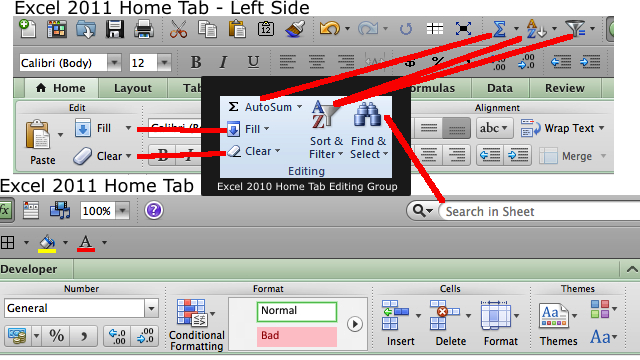 The Fill and Clear icons can be found in the Edit Group. AutoSum is located on the Formulas Tab in the Function Group. Sort & Filter exists as two separate icons in Excel 2011 and are located on the Data Tab in the Sort & Filter Group with an icon for Sort and one for Filter. The Find & Select icon is not on the Excel 2011 Ribbon but located on the right side above the toolbar in a different format: the Search in Sheet box, which has a drop-down button that will bring up options for Advanced Search and Replace.

In Excel 2011 you can find Sort and Filter on the Data menu, and Find can be found on the Edit menu but all of these are less than optimal because they take you away from the Home tab and require more clicks on the mouse or taps on the trackpad than are necessary.

As you can see in the Editing Group picture above, I’ve added AutoSum, Sort, and Filter icons to the Standard Toolbar to make these functions only one click away. This is a lot easier than hunting them each time.

In Excel 2010 the Styles Group mostly corresponds to the Format Group in Excel 2011. 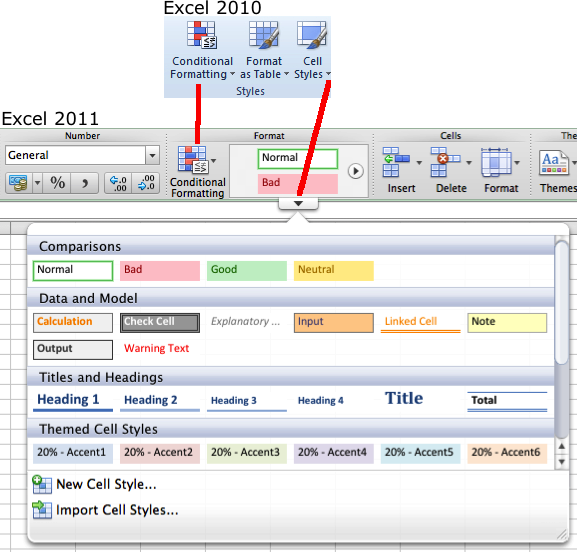 The first time you use the Excel 2011 Ribbon Home Tab can be a trying experience if you’ve just come over from Excel 2010 or 2007. Hopefully this little summary with pictures is a help to those of you who, like me, get frustrated with Excel for making things so different between Windows and Mac.